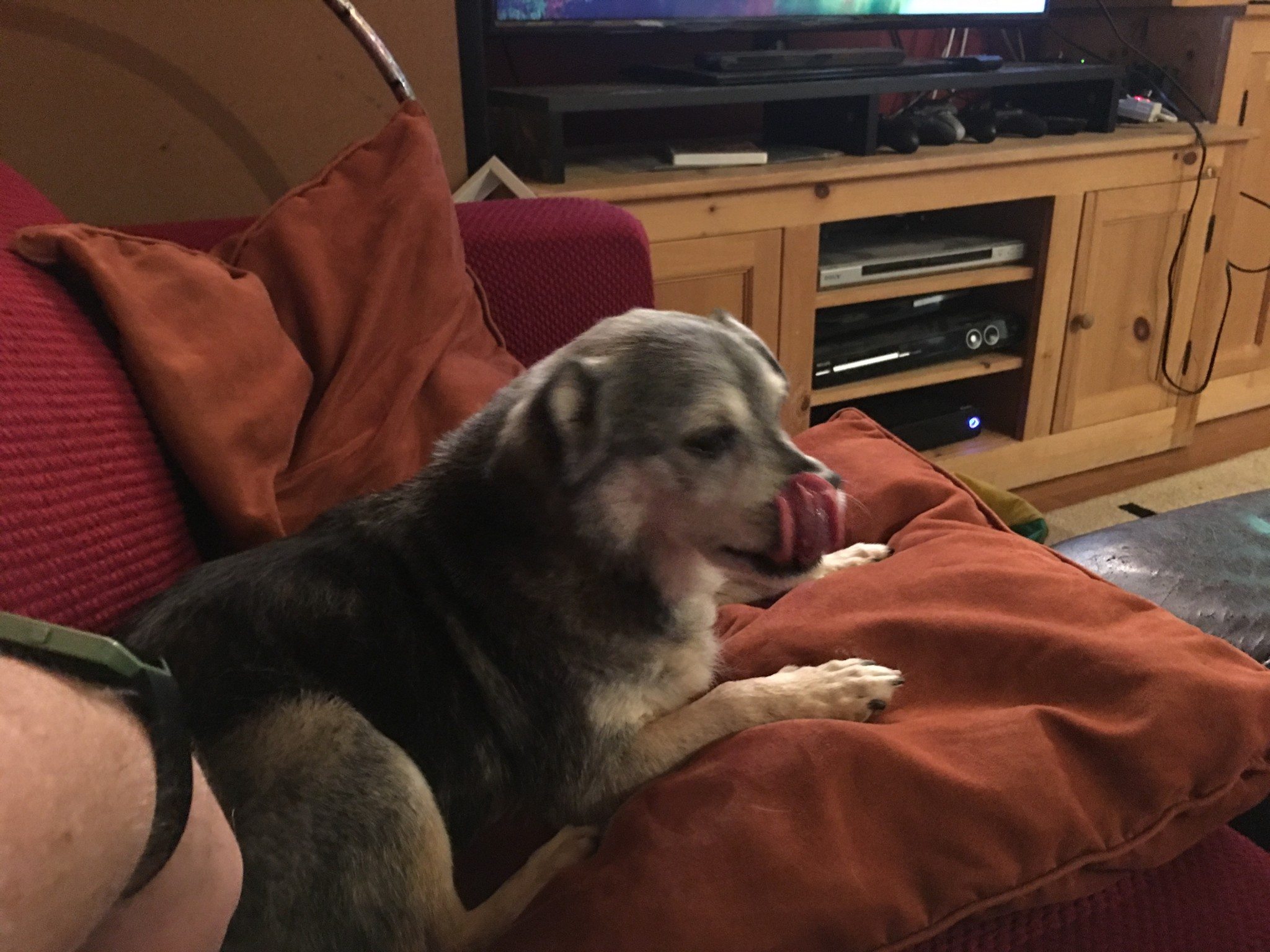 Are you listening to me???

Buster in the picture above is deaf. He turns 16 this month. We had him and another dog named Bonnie. They were inseparable. They both stayed in the same kennel and slept together. If Buster was laying down, she was sitting right on top of him. When Bonnie passed to the rainbow bridge, we started noticing different behaviour from Buster. He became more aggressive. I had thought it was old age and he was just a grumpy old man. It turns out he was deaf.

It was hidden from us, because he was taking his cues from Bonnie. If Bonnie was upset, he was upset. If Bonnie heard something she would bark, then he would bark. Once we realized he was deaf, it explained a lot about the not listening. I still have to tell the girls to make sure he is looking at them before they tell him to do something. I was lucky. When I first started training Buster I used hand signals with every spoken command. If I hadn’t we would have more problems today with Buster.

If you have a dog, like Buster, which cannot hear then the training methods you use will have to rely entirely upon visual signals; deaf dog training can be a challenging experience for the trainer as well as the dog. Many owners who train deaf dogs will use the sign language of humans; there is good reason for this. Standard sign language is a developed and tried and tested form of communication with a specific vocabulary of signs. Many of them are intuitive to learn, and they save you the trouble of inventing new signals or confusing yourself – their use also makes it easier for other members of your house to know how to communicate with the dog without you having to constantly describe and explain.

The first thing you will need to teach your pet is to pay attention to you. This is the case with hearing dogs but when your only means of communication are hand and body signals then your dog needs to be fully aware of you at all times and be attentive enough to recognise a new command and respond to it at the appropriate moment. If you are just setting out with the training of your deaf pet then it is best to keep him within a controlled environment where there are as few distractions as possible. Keeping his attention by frequently rewarding him one way of teaching him to pay attention to you; setting him reward tasks ensures that you are not just emptying the ‘goodies‘ cupboard for him but setting him tasks which he will be rewarded for successfully doing.

It is often said by those dog owners who have deaf pets, that they develop a far closer bond due to the need for attention which the animal’s deafness requires. Your dog will become attentive of your every move and gesture and this can often seem like a far more intimate kind of communication than using the voice. The rewards of training any animal can be huge but overcoming a dogs deafness has an added value in creating an unusually close bond between you and you will take satisfaction in overcoming your pets disability. Deaf dog training requires additional effort both from owner and dog, but the rewards for you both are immeasurable.