Chameleons have the ability to stretch their tongue up to… 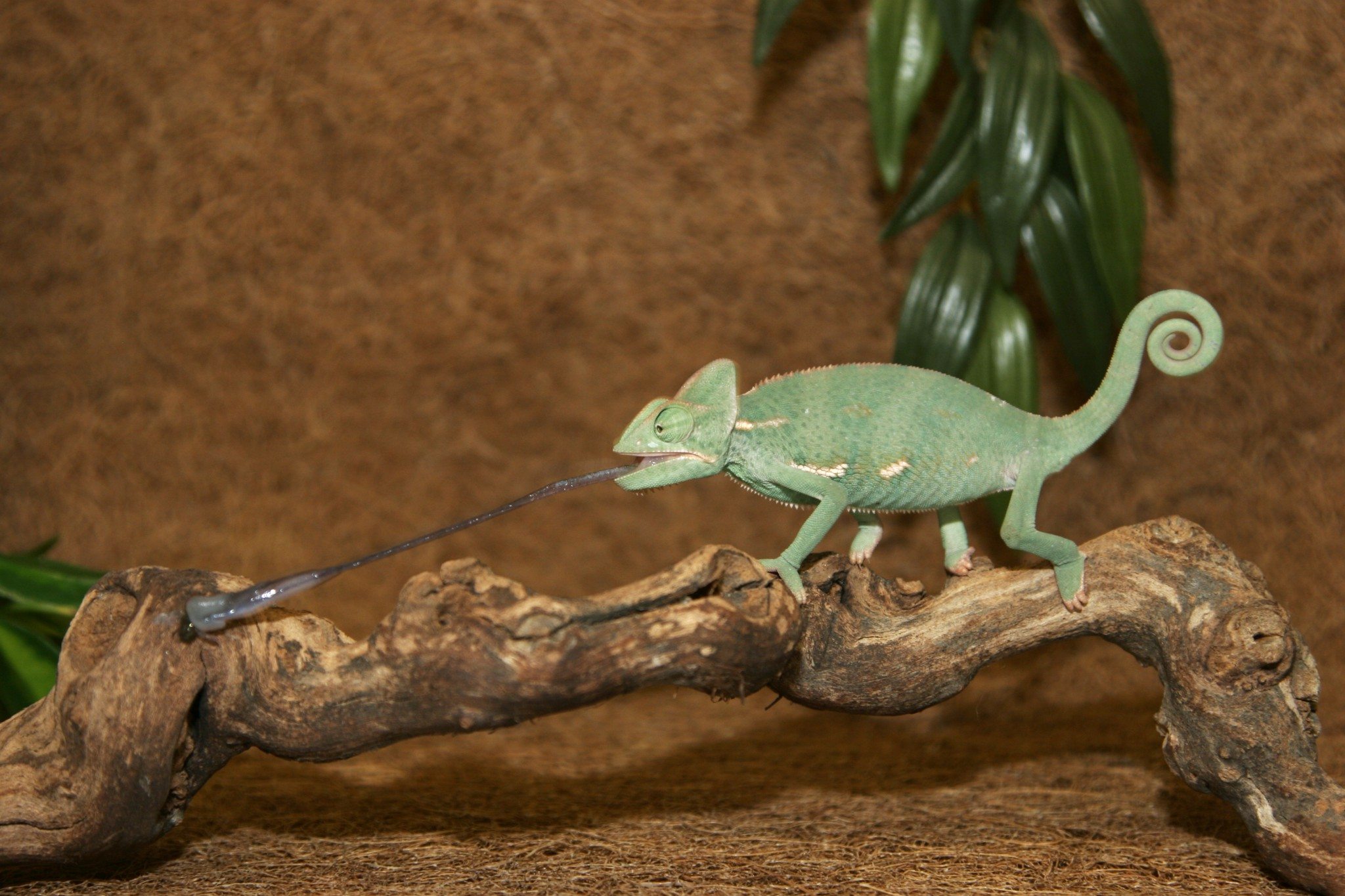 Chameleons belong to the lizard family. Chameleon has been derived from the Greek words chamai and leon meaning earth lion. The structure and size of chameleons varies a lot. They can be from one inch to thirty-one inch long. Chameleons are kept as exotic pets because of their characteristic color changing capability. They change colors so as to camouflage, communicate with each other and to regulate temperature. They also have a very long tongue to catch prey.

Chameleons do not have the ability to change colors from birth. They are either brown or grey color when they are born. They start by changing to one or two colors and when they reach five months, they gain total control of the color changing ability and are able to change to many colors like green, black, turquoise and blue green. Various colors show emotions such as stress, sense of temperature change, excitement and to communicate with other chameleons. Brighter colors exhibit good mood; darker colors such as black, grey and brown depict stress. Few other colors are also seen when the chameleon takes transition from color to another.

They even have very long tongue, which they use to catch flying preys. Chameleons have the ability to stretch their tongue up to one and half the length of their body. This way they can catch flying preys as well as preys, which are placed far off. They have three toes with two of them facing one side and the third in other direction. This structure helps them to get a firm grip, which facilitates their tree climbing habit. They spend most of their lives on treetops. Some of them also are gifted with prehensile tails, which are also used to take good grip while climbing.

Another amazing fact of chameleons is that they rotate their eyes in two different directions. Both the eyes are independent of each other. The structure of the eyes is globular which they use to rotate and get view of a larger radius. The eyes are used to watch out for enemies and as well as hunt for food. Along with insects and slugs they also eat plants.

Chameleons are kept as pets because many people find them very fascinating. But they are very difficult to be maintained and naive pet owners should not certainly start with them. Although they aren’t the toughest of all exotic pets, they are also not the easiest to handle. Their requirements are very comprehensive and owners simply get tired of them after one point of time. But if the owner has made up his/her mind, they should certainly go for a chameleon, which has been brought up in captivity and is trained. The ones that come directly from the wild are more dangerous, they have a possibility of being infected and it is very difficult for them to adjust to new environment. They will also be more stressed out, which will be a big hindrance in training. Also when the wild chameleons are caught and shipped to destination, there is a possibility of it dying on the way itself.

While selecting the pet, the health of the animal can be determined by close observation. The chameleon should be able to change colors and also should be active. They should be brightly colored and the flesh of the body should be smooth and not scaly. Males are easier to maintain because their nutritional requirements are less.

Species that are kept as pets are Panther Chameleons, Veiled Chameleons and Jackson’s Chameleons. Chameleons basically are solitary animals and their camouflaging ability explains it very clearly. They simply don’t like to be handled. They shouldn’t be kept with other pets and it is a really bad idea to keep two male chameleons together as they will fight and injure each other. They should be put in a cage with lots of foliage, which can cater to their needs of climbing trees and as well give them the desired privacy.

Free advertising for your Pet Service or Product business!