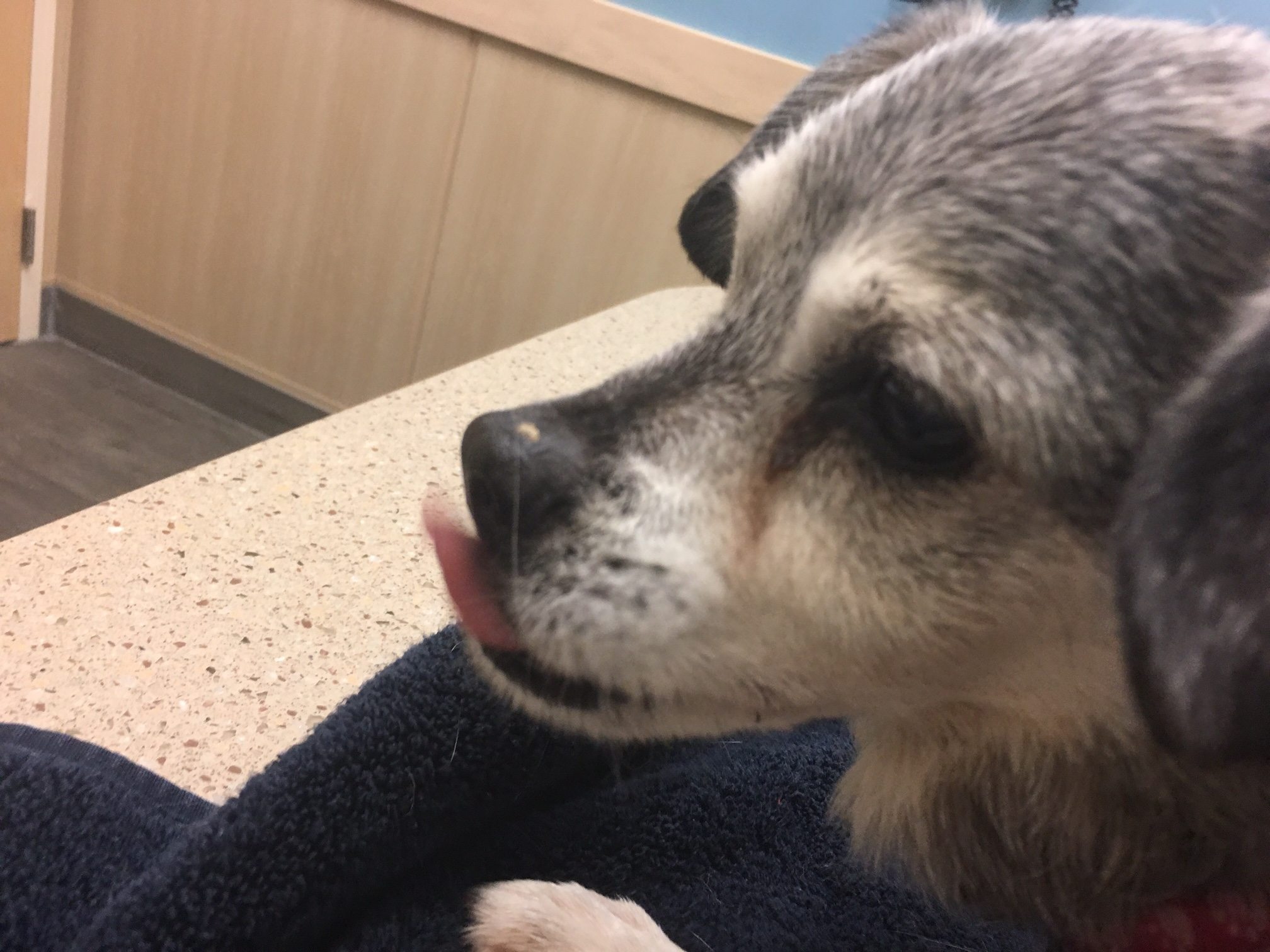 Lost Dog On A Walkabout! 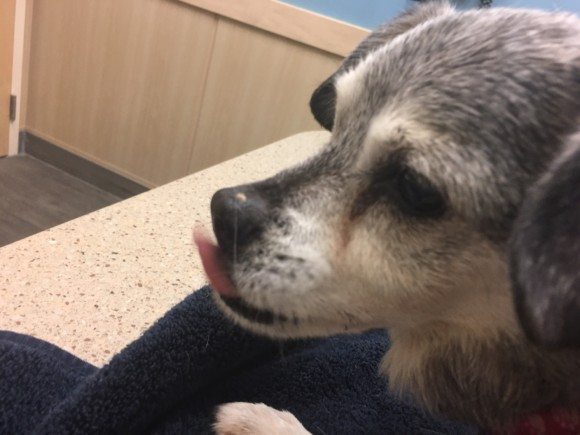 Day 1: That sinking feeling in your heart…

It is 6:15PM on Wednesday July 5 when I get the phone call. I was on my way home from work. I am told that Buster is missing and believed to have gotten out when the pool guy came to clean the pool. My heart dropped a few inches in my chest and I knew we would not find Buster. The pool guy comes around 12:00PM and Buster has been on the loose for about 6 hours. I wouldn’t wish this feeling on anyone. It is not enough that I love my pets, I devoted a considerable amount of my time to creating BarkAndSqueak.com to share my love of pets with everyone. This is a little easier to write since I now know where Romeo, I mean Buster, is currently located. He is sitting in his kennel at home.

I am a programmer and computer systems architect. A lot of people would think that means I build computer systems. I do, but as an architect it is my job to minimize the amount of risks or potential failures in the computer system. And more simplified, it means I focus on the negatives. Unfortunately, I approach real life the same way. In a couple minutes of getting the call, I had already calculated all the ways I would never see Buster again. It’s not good when your starting point is an arthritic, deaf and going blind dog out on the loose for 6 hours.

My number one concern with Buster getting out is that he would be hit by a car. Deaf and blind crossing the road is not a good mix. Molly, Buster’s Mom, was hit by a car. Molly was a good friend’s dog. My girlfriend at the time kept asking for a dog, but there wasn’t much room in our apartment. I kept joking that we could get a dog when Molly had puppies. Molly, a pekingese, was a 100% inside dog. Molly only made it out of the house twice. The first time, she met the neighbors Jack Russel Terrier. That’s how I got Buster as a puppy. And a few months after Buster was born, Molly got out one last time and was hit by a car.

Back to finding Buster. The only thing we had time for was to ride around the neighborhood and look for Buster. I say look, because we couldn’t yell his name, because he is deaf. Try finding a short little black and tan dog running throughout landscaped yards and alley ways is hard enough, but having a dog that will only come to you, if he sees a hand signal or a treat is near impossible.

Day 2: The Computer Geek In Me Looks For Ways To Find Buster

At this point, I have already decided that Buster is in one of three states. The first state would involve being hit by a car. The second is that someone has picked him up, and they have decided to keep him. The third is that someone has picked him up, and they have decided to turn him into animal services. As I write this I realize it sounds cold and clinical. In reality, I was a complete mess and felt that the first option was the most plausible. So to stop thinking so negatively, I started looking at every website that might help me find Buster. There are a lot of good sites. I found sites recommended by the local Miami Animal Services website. They were good and had info on dogs that had been found. We found that a site like PawBoost.com made us feel like we were actively searching for Buster online. They promoted Facebook posts with lost dog Alerts to accounts in your area. If you find yourself in this position, make sure to find sites that definitely cater to your city.

In addition to PawBoost, we were contacted by other sites that saw our posts and alert and posted alerts on their own sites. It was a whirlwind of action by people wanting to help us become reunited with Buster. I am skeptical, and was hesitant to interact with some of the people. I am going to place my skeptisim to the side and say that everyone who contacted did so with best of intentions. I thank them for their effort and help during this time.

A volunteer from Dachshund Rescue South Florida took a special interest in Buster’s case and was an awesome resource that helped us out. I know what you are thinking…Buster is not a Dachshund. That’s true, but a dog lover is always a dog lover. I am including this link, http://www.dachshundrescuesouthflorida.com/, to their website just for having such great volunteers.

Leti, the love of my life and wonderful Mother to our kids, came to me at 9:35PM and says let’s go put posters at every house we can. I love her! I don’t like the idea because it was too late to be going door to door. I explain to her my three states of Buster, trying not to cry. I told her we just needed to let what happens, happen.

PawBoost uses Facebook to get lost & found pet alerts in front of the local pet lovers who want to help. PawBoost Alerts are now seen millions of times every single day, leading to thousands of happy reunions. 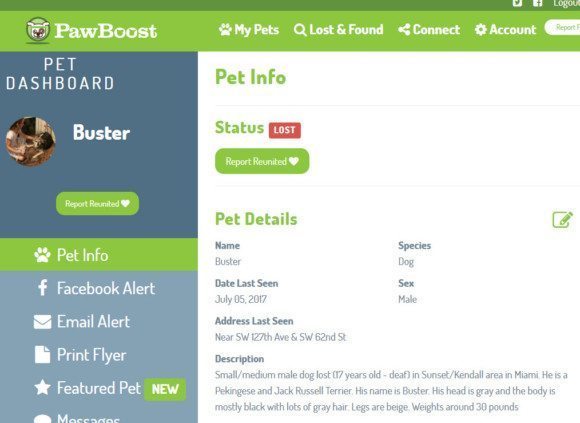 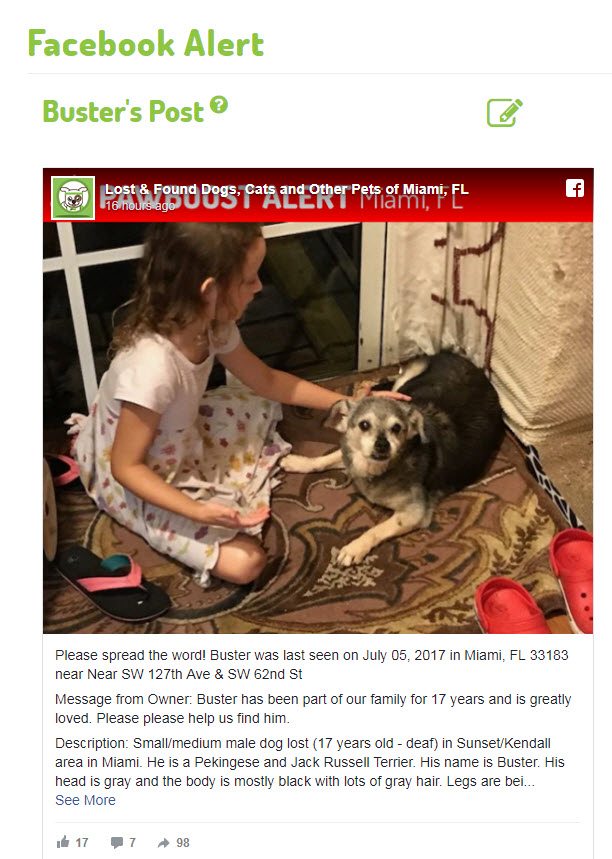 We found our dog on PetHarbor.com, but shortly after that, there were comments from others on the PawBoost alert that saw his entry on PetHarbor.com. Had I not known about PetHarbor.com, PawBoost.com would have gotten me to know where Buster was, which is the big reason for including them in this blog entry. I picked Buster up from Animal Services and as I have said, he is home.

I wish this was the end of the story, but he came back hurt with some conditions that will take weeks to heal. It is actually Saturday, one day after recovering him from Animal Service, when I am finishing this blog entry. He spent the first part of today at our vet’s office. I will write about the conditions and his healing in a later blog entry. For now, we are extremely happy he is home! 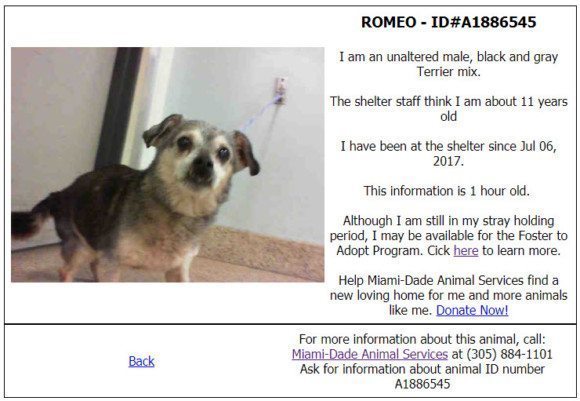 Buster in his new makeshift recovery room at home.

Before You Lose Your Pet

Cat Wants to Get a Better Look at Turtles