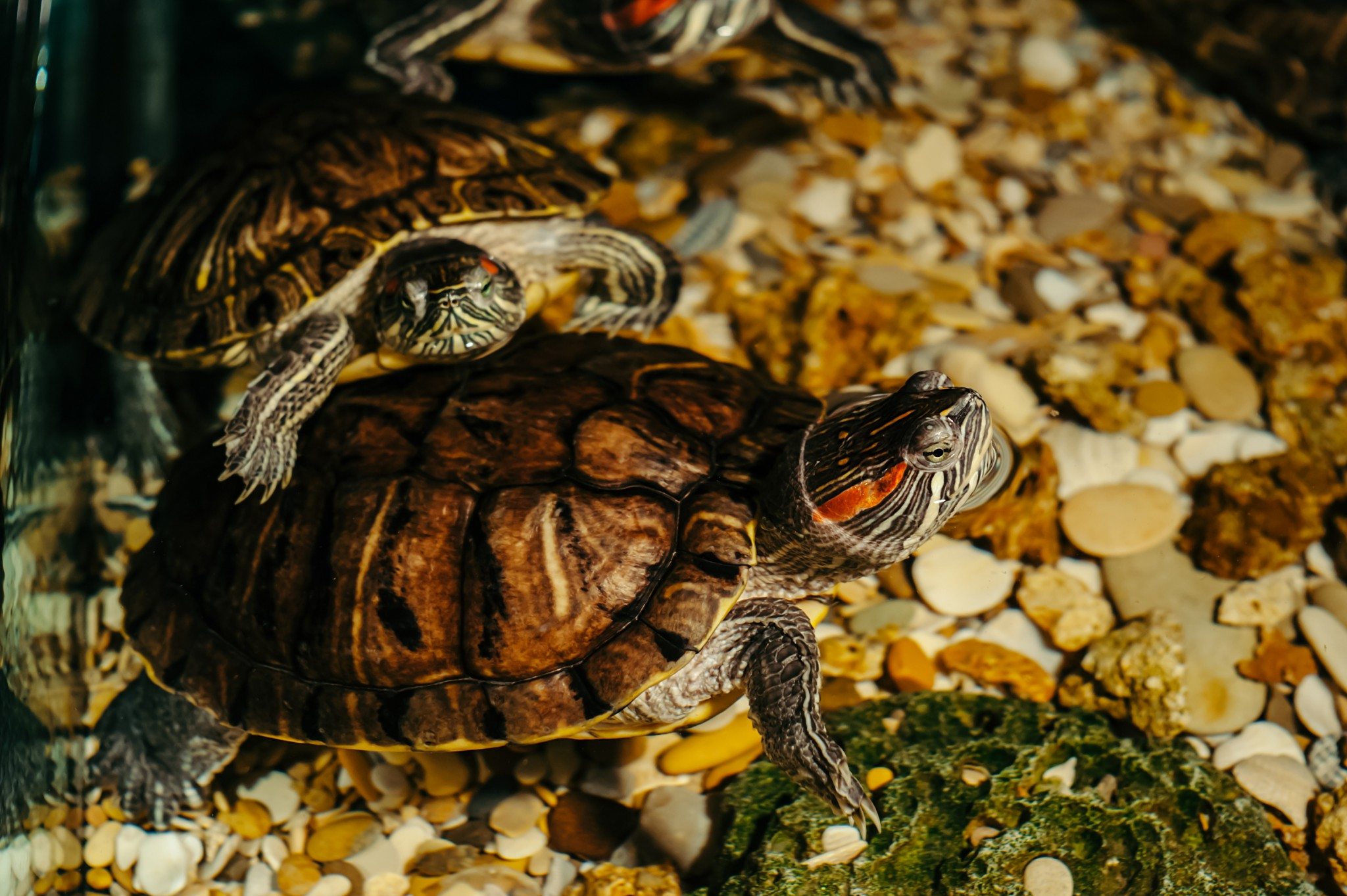 You probably remember those little turtles that used to be sold at county fairs in terrible little trays with that ghastly plastic palm tree in the center. You probably even got one with — egad! — a painted shell. It almost certainly didn’t live long. But now that you know better, you’re in a position to do better. Under your good care, you can expect your next red eared slider to live as long as 70 years. Get your kids involved in its care, because you’re going to be passing it on. One caveat: unlike other turtles like the musk and mud turtle, the red eared slider can grow as long as a foot. Make sure to put a 120 gallon tank on your checklist.

This common reptile is found, usually in slow-moving bodies of water, from the midwest to the deep south and down into Mexico. It also pops up in other areas because people released their baby turtles when they found them too much trouble to care for. In colder climates, the red eared slider hibernates.

The red eared slider female grows larger than the male. You can tell them apart because he has a longer tail and longer claws on his front feet. They both have lovely green skin highlighted with yellow stripes and that tell-tale red patch behind each eyes. The carapace is singularly beautiful and may change from green to yellow or darker green with attractive patterns on the scutes. A really old turtle may lose these decorative markings and just have a shell that’s a dark olive green or brown-green. Some male turtles turn black. Red slider fanciers have also bred pastel turtles and even albino turtles, which are bright yellow.

The checklist for the habitat will be that large glass or acrylic aquarium or even a small pool. Both will need to have an area for the reptile to haul out. A substrate of aquarium gravel can make a large beach, and pieces of driftwood or a collection of rocks can be used as a basking area. Make sure to put a screen over the aquarium so the turtle can’t escape. Aquatic plants can be placed in the tank, but they should be the real type that the animal can eat. If they’re made of plastic, the red eared slider will try to eat the plastic. The temperature of the aquarium should always be around 75 degrees Fahrenheit, though the basking site’s temperature should be between 85 and 90 degrees. Make sure that any lighting is secure and can’t fall into the water. Your pet should also be exposed to ultraviolet light to make sure they get their RDA of vitamin D3. Replace these bulbs every six months or so.

The temperature of the water should be between 75 and 86 degrees for the red slider, and the temperature should be maintained via a submersible heater. A thermometer that’s also submersible can help you make sure the temperature is where it ought to be. The water must be filtered and cleaned fairly regularly. If your pet eats in the same tank where it lives, you’ll need to change the water every week. Drain, clean and refill the tank every one or two months.

Baby sliders are mostly carnivorous, but their diet expands to include plants as they grow older. Young ones should be fed every day, and adults can be fed every other day. One reason that the tank has to be changed so often is that turtles are sloppy eaters. Some people take theirs out, and feed them in a separate tank. Red eared sliders love pellets made for turtles, worms, crickets, snails, chopped up chicken or beef. Bigger specimens may eat pinkie mice. They’ll also go for all kinds of greens and fruit.

Look forward to your red eared slider being a companion of many years.